Good afternoon, Chairman Degnan, Director Foye, and Commissioners.  My name is Trent Lethco. I’m an RPA board member, transportation planner and avid cyclist.  Thank you for the opportunity to speak about the need for improvements to the GW Bridge shared-use path.

During that same period, peak bike traffic across the GW Bridge grew a near identical 64%, notwithstanding that the facility is judged as “failing” by national standards. [2] [3] [4]

As infrastructure and transportation planners, we’re tasked not just to accommodate bicycling’s growth, but to encourage it. [5]

As roads become ever more crowded, shifting trips to space-efficient, active modes is critical to ensure that the region thrives, grows and maintains its global status, while simultaneously promoting healthy lifestyles and environmental sustainability. [6] [7]

Around the U.S., cities have recognized these benefits and are increasingly invested in dedicated facilities for pedestrians, cyclists and transit, like the Tilikum Crossing in Portland and the new East Span of the San Francisco-Oakland Bay Bridge.

Improvements to the GWB paths represents the next critical link to help the region achieve the goal of a robust bike grid.

Being the only Hudson crossing available to cyclists and pedestrians, the GWB connects the region’s greenway systems. 9W, leading north from the GWB, is a key link to the New New York Bridge, soon to replace the Tappan Zee, which will have a world class shared-use path that meets current and future demands of cyclists enjoying this recreational loop.

Cycling is no longer an “alternative mode” but has become an essential component of surface transportation systems that alleviates overcrowding on trains, buses and roads. In the years ahead, planners will only push harder to grow this mode even more – creating even further pressure on a substandard facility.

Projects on the scale of this re-cabling effort are rare. The Port Authority has an historic opportunity to address these deficiencies and make this a better facility for all users.

When the GW Bridge opened in 1931, then-Governor Franklin Roosevelt proclaimed it a ‘monument…to the motor age.’  I hope that, 85 years later, we’ll look back at how the Port Authority made the George a monument to sustainable, active travel for the generations to follow. 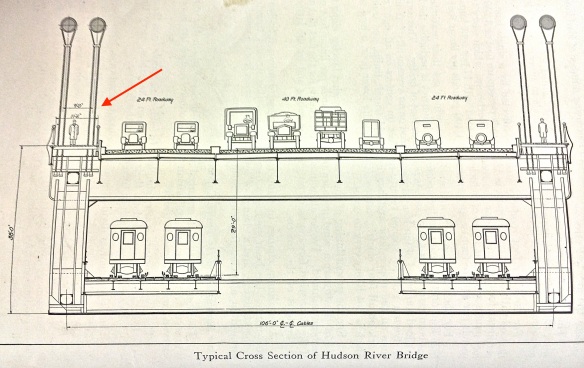 “Cycling in the City,” NYC DOT and the NYC Department of Health and Mental Hygiene, http://tinyurl.com/hcu5yaz

[5] “Policy Statement on Bicycle and Pedestrian Accommodation Regulations and Recommendations,” US DOT, http://tinyurl.com/h3dfg92