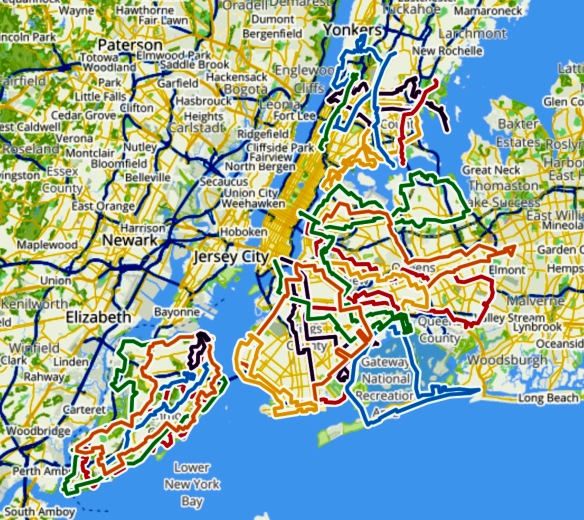 WHEREAS the New York City Council voted to approve Intro 0291-2022 calling for a citywide greenway plan.

WHEREAS the NYC Council has called for $3.1 billion in new capital funding to implement the proposal.

WHEREAS the time frame for NYC Department of Transportation (“DOT”) to submit first draft of its greenway plan has been pushed back to December, 2024—and the period to complete construction is undetermined and could conceivably take decades.

WHEREAS the proposed Grayways network:

Spans the Bronx, Brooklyn, Queens and Staten Island, and,

Aggregates the NYC’s 1500 miles of bikeways and on-road bike lanes, plus quiet residential streets and commercial areas empty on weekends (“industrial parks”), and

Incorporates parks and playgrounds at regular intervals, thereby incorporating rest stations into the network (“places to go”) and

WHEREAS improvements needed to make network of low-stress, residential streets acceptable to a wider pool of potential users can be implemented faster, and at less cost, than networks comprising high-stress roads,

WHEREAS the Grayways proposal advances goals set forth in the NYS Climate Leadership and Community Protection Act: Extend Access to Green Space; Benefit Underserved Constituencies; Create Jobs and Develop Local Economies; Have a Positive Impact on Climate Change; Invest in Resilient Infrastructure, and

WHEREAS the Grayways proposal furthers the objectives of signature DOP&R programs: Parks Without Borders; Walk to a Park and Community Parks Initiative, and

WHEREAS the Grayways proposal furthers the objectives of Council bills calling for: a citywide greenway network (0291-2022, CM Rivera); public rest stations in each zip code (0258-2022, CM Joseph) and a board to oversee a network of active transportation parking hubs (0046-2022, CM Borelli), and

WHEREAS the Grayways proposal will reduce overcrowding on the Central-Prospect Park Drives, Coney Island-FDR Boardwalks and Hudson Greenway by providing alternate recreational capacity during periods of peak use, and

WHEREAS a network with a recreational component is apt to draw twice the use as one designed solely for commuting, and

WHEREAS such a network will broaden the constituency for further investment in bike infrastructure and city parks, and

WHEREAS the network will bridge “transit deserts”, and reduce personal spending on transportation as a percentage of household income, and

WHEREAS the network will leverage billions of dollars already invested in bike paths, bike share and parks to drive tourism and support the trend toward “staycations,” and

WHEREAS the network will drive patronage of local food shops and Business Improvement District-sponsored special events (“Bronx Night Market”), and

WHEREAS the Grayways network will draw recreational cyclists, not only from within the City, but from surrounding suburbs of Long Island, Westchester, CT and NJ, and

WHEREAS NYC bike shops rely on recreational cyclists to generate the bulk of their profits, and

WHEREAS studies by the National Association of Realtors show a home’s value is increased 5-10% by proximity to a bikeway, and

WHEREAS the Climate Leadership and Community Protection Act mandates that New York take measures to permanently reduce greenhouse emissions, and 36% of those emissions are from the transportation sector, and

WHEREAS, a contiguous bike network will reduce vehicle miles traveled, facilitate multi-modal trips, and provide the rationale for bike share providers to extend service to the outer boroughs, and

WHEREAS commute times by bicycle on along designated bike routes are comparable to driving or mass transit, and that E-bikes can further reduce trip times by 50%.

WHEREAS increased bicycle mode share can increase throughput, along existing roads and bridges, thereby extending their useful service life, and

WHEREAS, a contiguous cycle network will create the imperative for NYSDOT, NYCDOT, MTA, PANYNJ to enhance bike access across bridges each agency operates, and

WHEREAS, precedents for the Grayways proposal include bicycle master plans that address urban, suburban and regional needs comparable, and

WHEREAS, the Grayways proposal has the support of seventeen cycling organizations who travel these routes on a regular basis,

NOW THEREFORE BE IT RESOLVED THAT _____________, endorses the Grayways proposal as a means to implement, and subsequently upgrade, a city wide greenway plan, and