Wider GWB paths and a connected grid would draw down trips into the Port Authority Bus Terminal.  This will reduce congestion, extend the service life of existing facility and, by offsetting latent demand, extend the tenure of its replacement.

The problem is detailed in the PA’s Trans-Hudson Commuting Capacity Study,[1] along with criteria for strategies to reduce demand.  Cycling across the GWB meets all those criteria.

29K Bergen residents commute by bus to New York City.  That’s 36% of all Bergen-NYC commuters and 30% of total PABT demand.[2]

Compete on cost and travel time

The bike commute from Fort Lee to the PABT is 54 minutes, the same as bus. But cyclists get a “one seat ride” whereas 90% of bus riders must also walk or subway.[4] [5]

Be operationally and politically feasible

Manhattan already has a robust infrastructure.[6]

A grid across Bergen would cost a few million dollars.[7]

It offers a safe, healthful, fun commuting option to 51K Bergen commuters who don’t bus now, but who might with improved service.[13]

Have an immediate and durable impact

New capacity would be online by 2020 and through 2100, reducing demand on current and replacement Terminals.

Cities around the world have successfully expanded cycling infrastructure and mode share while reducing congestion and transport costs.[14] [15]

And the GWB wouldn’t be alone. The new Goethals will afford locals a 75 minute commute to Wall Street via the Staten Island Ferry.  And the new Bayonne an hour’s.

Does the Agency want to spend ten billion dollars on a new Terminal and have to tell travelers to “stay home”?[19]  I don’t think so.

[2] The 2013 US Census Journey to Work dataset puts the total size of the market for commuters from Bergen County to NYC at 80,002 people. Multiplying by an estimated bus modal share of 36.3% leaves 29,041 Bergen-NYC bus commuters, PANYNJ, THCCS, B22

Note: If the replacement PABT is moved west and the surrounding neighborhood becomes more congested, that will further increase walk times. 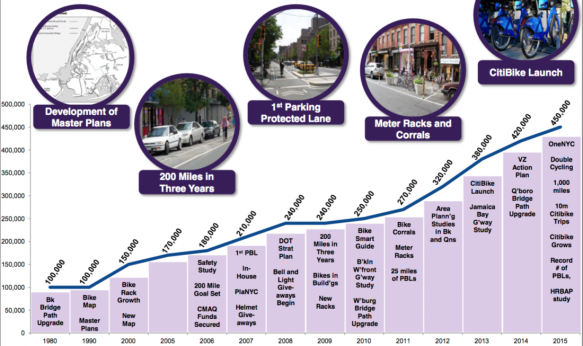 [13] “Latent demand is desire for transportation unmet by existing supply. It generally cannot be observed, but can become real growth after capacity is increased.”, PANYNJ, THCCS, A44

[18] “(The GWB) is a fast and potentially attractive link for destinations on the Upper East Side such as Hunter College, Rockefeller University, Lenox Hill Hospital, the Hospital for Special Surgery, New York-Presbyterian Hospital, and the Memorial Sloan-Kettering Cancer Center, as well as the major employment center of Midtown East.”, PANYNJ, THCCS, A31, B9