In 2011, the Port Authority developed its current Cost-Benefit Analysis Framework,1 which appears to have informed its 2013 decision not to widen the George Washington Bridge paths.

Today I will discuss how the Framework’s methodology failed to capture the benefits to the region–or the Agency.

Cycling as a primary mode of travel

Critically, the Framework does not regard cycling as a primary means of travel.  Rather, as a secondary means to improve road projects and fill in gaps to mass transit.2 3   Consequently, investment in cycling infrastructure is denied the same benefits accorded other modes.

In contrast, USDOT explicitly regards cycling as equal to other modes and calls on providers to upgrade capacity on major projects–even those categorized as “maintenance.”4 5  And there are numerous examples of major cities who’ve invested heavily in cycling infrastructure and sharply reduced car trips into their central business districts.6 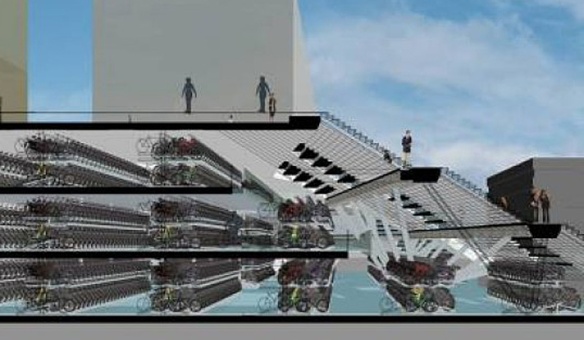 The Framework further fails to recognize benefits specific to cycling.  These include cost-effective reductions in public health spending7 8 and greenhouse emissions.9  As well as the potential to substantially mitigate a widespread transport outage–and the resulting fiscal fallout.10 11

Benefits to the Agency

Benefits to the Agency that the Framework fails to capture include:

• Participating in cycling’s monetization by bike share providers15 and the legalization of electric bikes.16 17

• And, by realizing the George’s potential as a tourist draw, increasing foot traffic past vendors in the George Washington Bus Terminal.18

Changes to the operating environment

The Framework does not fully anticipate challenges to Agency’s operating environment:

• The increasing urgency of regional actors to reduce greenhouse emissions.19

• Onset of congestion pricing that will change behavior and create new revenue streams.

As best I can determine, the Agency never performed a cost-benefit analysis for the GWB paths.21   But even if it had, the exercise would have failed to capture the benefits needed to justify the $90 million cost–due to the Framework’s biased presumptions.

The Framework, however, is due for an update.  One that takes into account developments of the past decade, regards cycling as equal to other transport modes, and includes it as a necessary component the region’s transport matrix.

2 “Bus transit, carpool, bicycle and pedestrian facilities can improve the safety and reliability of those modes.”, Ibid, p.12

4 Transportation providers should consider cycling equal to other modes and to make substantial upgrades to capacity on new construction and restorations., 2010 Policy Statement on Bicycle and Pedestrian Accommodations, USDOT, http://tinyurl.com/yccn8qmo

5 “Congress clearly intends for bicyclists and pedestrians to have safe, convenient access to the transportation system and sees every transportation improvement as an opportunity to enhance the safety and convenience of the two modes.”, Accommodating Bicycle-Pedestrian Travel: A Recommended Approach, USDOT, http://tinyurl.com/ya8wmpxe

Portland’s Tilikum Crossing opened in 2015 at a cost of $135 million. Image Tedder.

7 “The increase in exercise supported by a expanded cycling across a wider GWB would reduce mortality by 21 lives per year vs. the same population who didn’t cycle. That’s a public health savings of $195 million per year.”, WHO/HEAT, Complete George, http://tinyurl.com/z2u4d9r

9 “With the transportation sector overtaking power generation as lead emitter of CO2, the Port Authority must include tenants and customers in its 80% by 2050 pledge greenhouse gas reduction goals.” 80 by 50, Ibid, https://tinyurl.com/yawf962h

10 “With tunnel repairs in the offing, bikes are key to keeping people on the move.”, NJ Spotlight, https://tinyurl.com/ya8ffz3e

12 “Creating an effective network also means improving existing trails and connections. In particular, the connections between the greater region and New York City include major bridge crossings – such as the Brooklyn and George Washington Bridges – that are likely to be in high demand by many users”; RPA Proposes Extending and Connecting Region’s Trails to Form a Unified Network, P. 16., Regional Plan Association, http://tinyurl.com/ydba4gk5

14 Cycling across the GWB, in combination with a regional bike grid, meets the PA’s criteria for a successful strategy to reduce bus trips into the midtown Bus Terminal; Latent Demand, Ibid, http://tinyurl.com/yb8atw8t

18 “Using Walkway Over the Hudson as a model, a ‘Complete George’ with robust bikeways, discrete paths for pedestrians and runners, and unobstructed views of the NY-NJ skylines and the Palisades would annually draw 290,000 tourists, spending $42 million and sustaining 675 jobs.”, Linear Park, Complete George, https://tinyurl.com/y8zu5m6q

20 Cycling in the City, Cycling Trends in NYC 2018, NYCDOT-NACTO, https://tinyurl.com/hcu5yaz

21 Though the project was small enough to be conducted in-house, categorizing the recabling as “state-of-good-repair” made the exercise optional., CBA Framework, PANYNJ, p.4