Organizations adapting to a “two-degree world” face three channels of risk: physical, liability and transitional.  The Port Authority is starkly vulnerable to all three and would be wise to rebalance its portfolio with assets whose use would reduce emissions.

The paradox of climate change is that those who emit greenhouse gases have little incentive to reduce the significant costs they impose on future generations. And “once climate change becomes a defining issue for financial stability, it may already be too late.”1

To address this dilemma, Bank of England President Mark Carney, proposed the concept of a “carbon budget” – one that would hold temperature increases to two degrees Celsius above pre-industrial levels.2

Mr. Carney cautioned, however, that organizations adapting to a “two-degree world” faced three channels of risk: physical, liability and transitional.

I believe the Authority is starkly vulnerable to all three and needs to overhaul itself within the timeframe of its current capital plan.

Physical risk results from climate-and-weather events that damage property or disrupt trade.  Even if Authority assets are “hardened,” access to them will be threatened as events increase in frequency and intensity.3 4  Use patterns, growth trends, and consequently, revenue streams, will all be affected.5 6

Liability risk arises when parties who have suffered loss or damage seek compensation from those they hold responsible.

While the Agency may not like the characterization, it is in the fossil fuel business.7 8 That case is supported by its capital allocation, revenue streams and historic support for car travel and aviation.9 10 11 12

Transition risk occurs when movement towards a low-carbon economy triggers a repricing of assets.  Examples include energy producers who need to write down oil reserves.13  And car companies transitioning out of domestic sedan production.14 15

Mr. Carney further cautions that “success is failure,” meaning that rapid transition to a two-degree world could trigger a sudden, major collapse of asset value.  He advises businesses-at-risk to disclose exposure, develop a mitigation plan and set a timetable for implementation.19

The Authority’s current 10 Year Capital Plan heavily weights fossil fuel-oriented activities: aviation and automotive.  Although such assets generate the bulk of Authority revenues, they are also the ones most at risk.20

Following Mr. Carney’s advice, the Agency would be wise to rebalance its portfolio with assets whose use would reduce emissions: mass transit (PATH, Gateway) and active transportation (paths on bridges, bike share systems and bike parking at transit hubs).

Their value will only appreciate as the region accelerates towards a low-carbon economy and new channels of funding come online.21

1 “The horizon for monetary policy extends out two to three years. For financial stability it is a bit longer, but typically only to the outer boundaries of the credit cycle – about a decade. In other words, once climate change becomes a defining issue for financial stability, it may already be too late.”, 2015 Address to Lloyds of London: Breaking the Tragedy of the Horizon – Climate Change and Financial Stability, Mark Carney, Bank of London, p. 4, https://tinyurl.com/yapkmeam

2 “The desirability of restricting climate change to 2 degrees above pre-industrial levels leads to the notion of a carbon ‘budget.’  Such a budget highlights the consequences of inaction today for the scale of reaction required tomorrow.”, Ibid, p. 5

4 “The region’s three major airports, plus its major business jetport, are affected by sea level rise (“SLR”) by varying degrees, and all are affected by storm surge. Teterboro faces potential inundation with as little as three feet of SLR. EWR and LGA withstand three feet but are vulnerable to six feet. JFK is able to withstand both threes and six feet, but will need to be hardened for future storm surges., Upgrading to World Class, The Future of the Region’s Airports Revisited, p.20, Regional Plan Association, https://tinyurl.com/ybuvzf99

6 “Climate change can cause operational disruptions that lead to a decrease in business activities and revenue. For example, higher temperatures alter airplanes’ aerodynamic performance and lead to a need for longer runways. In the face of consistently higher temperatures, airlines may seek airports with longer runways, shifting revenue from those that cannot provide the necessary facilities.”, Lenders’ Guide for Considering Climate Risk in Infrastructure Investments, 427MT, https://tinyurl.com/ycn9zuvw

8 “Washington Heights is one of the most polluted areas in [New York City].” … “The most important transportation issue in CB12M is the traffic flow. During the peak hours we face traffic jams on the main streets. CB12M has the most bridges connecting Manhattan with the Bronx over the Harlem River and to New Jersey over the Hudson River.”, Statement of Community District Needs, Manhattan Community Board #12, p. 86, 129, https://tinyurl.com/y77zhmpr

13 “Cases like Arch Coal and Peabody Energy – where it is alleged that the directors of corporate pension schemes failed in their fiduciary duties by not considering financial risks driven at least in part by climate change  – illustrate the potential for long-tail risks to be significant, uncertain and non-linear.”, Breaking the Tragedy of the Horizon, p. 10

14 GM’s job cuts are another sign of a future with fewer cars, Wired, https://tinyurl.com/yb2qupja

17 This past summer, a loose electrical bracket hanging from the roof of a Hudson rail tunnel pierced the passenger compartment of two trains.  Had the incident resulted in loss of life, the tunnels would have been closed immediately, for an extended period., Where did the metal pole come from that punctured an NJ Transit train? nj.com, https://tinyurl.com/y9xfns6a 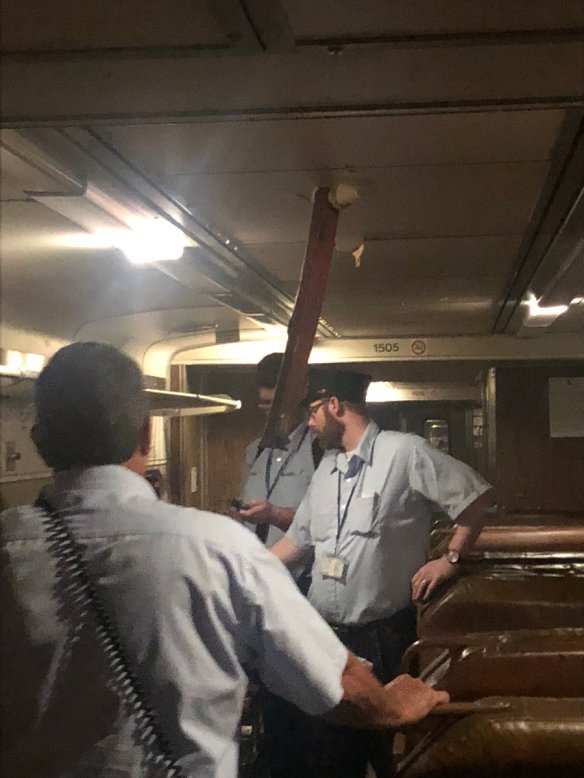 18 “The speed at which such repricing occurs is uncertain and could be decisive for financial stability. … Risks will be minimized if the transition begins early and follows a predictable path, thereby helping the market anticipate the transition to a 2 degree world.”, Breaking the Tragedy of the Horizon, p.6.

19 “The key factor that’s missing is urgency,” Feltmate declares. “Every single day we don’t adapt is a day we don’t have. People think we have the luxury of time to embrace adaptation, but the reality is the extreme weather is here now.”, The fantasy of two degrees and why we may have to adapt to climate change, National Observer, https://tinyurl.com/ybb4a5x6

20 ‘We are in trouble.’ Global carbon emissions reached a record high in 2018., Washington Post, https://tinyurl.com/ybx3wh2q