My name is Neile Weissman, President of New York Cycle Club.  Thank you for the opportunity to speak regarding bicycle access on Metro North.

NYCC is all volunteer organization, comprising 2,000 members. Our range is within 125 miles of the city and train travel is essential to access many prime routes.

For more than a decade, we’ve enjoyed excellent relations with Metro North, coordinating rides in advance and cooperating with conductors once on board.

We have a spotless record of safety and not impeding operations boarding or disembarking. Our leaders know how to manage groups.  And riders know to keep our footprint clean and free of grit.  We forego monthly and group discounts and typically ride to terminus, paying full fare .

Lately, Metro North has been restricting us to much smaller groups than in the past, significantly complicated planning of our spring training series.  We believe you can accommodate us safely, and without jeopardizing operations.

The (2) bike per car limit, is arbitrary, inflexible and not based on observation.  On M7-M8s cars, we can store eight bikes in spaces allotted for two — safely and without blocking aisles.

NJ Transit recently made similar adjustments to their bike policy.  Consequently, virtually every weekend train is now a bike train and with system capacity to move 7200 cyclists per weekend. M2/3 “dead head” car with bikes. Bungee cords (or bike helmet straps) secure the bike wheel to the rack, keeping bikes out of the aisle and preventing them from moving around.

As cyclists, we’re subject to limits not applied to golfers, campers, musicians or passengers with oversized luggage, that’s left unsecured in storage areas, on seats and in overhead racks.  Yet as taxpayers, we’re required to supplement Metro North’s farebox — whether we’re afforded access or not.

Double bass on an M7.

Finally, mindful of the hundreds of millions of dollars cyclists contribute to their region’s economies and that half of NYC households don’t own cars, you have letters of support from Ulster, Dutchess, Putnam and Westchester counties (below).

NYCC believes that by working together with Metro North to revisit the current regulations, we can return to our excellent relation. 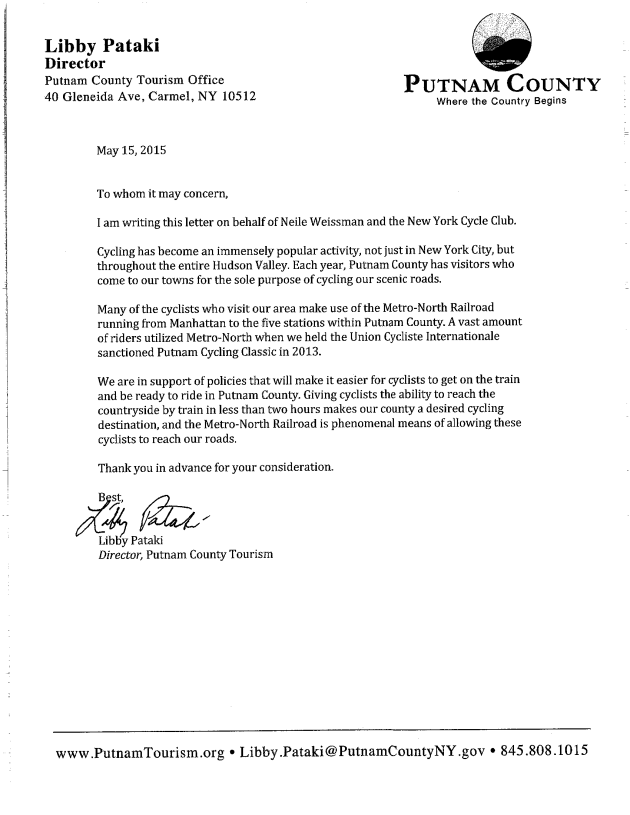 – Bike trains out of New York City date back to the 19th Century.  As early as 1888, an account in the Brooklyn Daily Eagle details cyclists disembarking in Jamaica, Queens for runs out to Jericho Turnpike and Patchogue.
– In 1897, the Manhattan Railway Company ran Sunday service for 300 cyclists featuring a concessionaire to serve donuts and coffee and an onboard mechanic to service the bikes.

– In 1955, British Transport Films produced Cyclists’ Special to promote weekend excursions from London to the English country side.  Service included on board dining and specially configured luggage cars to store quantities of bicycles.