I am here today to speak in support of the Cyclists’ Proposal for widening the bicycle and pedestrian pathways across the George Washington Bridge and to encourage you to aggressively use the unprecedented interest rate environment we have to finance this and other projects that may enhance bicycle-pedestrian access. 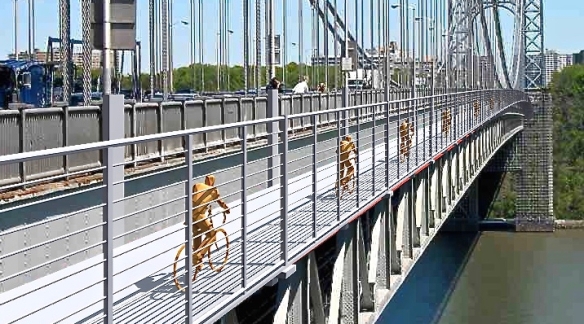 I have over 25 years of experience working in the debt capital markets — first working on the “sell” side with Citigroup and Salomon Brothers for 12 years and since then on the “buy” side with several hedge funds that invest in all varieties of debt. As such, I am familiar with bond ratings and the need to maintain Debt Service Coverage Ratio at healthy levels (see notes below).

I am sure that all of you would agree that the current interest rate environment is the most attractive it has ever been in our lifetimes (if not in the whole history of the United States). The Port Authority issued bonds last month at rates ranging from 0.28% for 1 year bonds to 3.35% for 20 year bonds. In a long-term historical context, those rates are unheard of.

The benefit of these low interest rates is that it allows the Port Authority to finance the Cyclists’ Proposal, and other necessary projects, at lower cost, and without affecting your credit rating.  As of 2014, the PANYNJ has approximately $20.8 billion of bonds and other indebtedness.

The incremental cost to finance the Cyclists’ Proposal is a rounding error.

Replacing the cables on the George Washington Bridge is a once-in-a-lifetime project. Combined with the cost savings and benefits to end users of widening the GWB’s main spans during the actual re-cabling, the savings realized from financing it in the current interest rate environment make the Cyclists Proposal a no-brainer.

Per its 2014 Annual Report, the PANYNJ had approximately $20.8 billion of debt, almost all of which is publicly traded municipal bonds.

Issuing new bonds is how PANYNJ funds its new capital projects and thus the ratings on those bonds are an important metric for both the PA and for investors. Current bond ratings (as of June 2015) for PANYNJ are AA-, AA-, Aa3 from S&P, Fitch and Moody’s, respectively. All three agencies have a “stable” outlook on PANYNJ bond ratings.

The most important financial metric for the three rating agencies is the Debt Service Coverage Ratio (DSCR). Essentially the DSCR is net income divided by interest plus principal payments.  [The DSCR is calculated by taking the total revenues of all PANYNJ operations, including grants from governments and other entities, and subtracting out the operating expenses, but not the capital expenses, and then dividing that by the sum of the interest expense on debt plus the principal payments.]

In order to maintain its credit rating, all three agencies want the PANYNJ to have a DSCR consistently above 2.0 times.

Per its 2014 Annual Report, the PANYNJ calculates that the DSCR has been above 3.0 times in each of the past four years. Although Moody’s, in its own calculation, makes certain adjustments which result in a DSCR of 2.26 times.

The Cyclists’ Proposal has an estimated capital cost of $90 million. This represents less than 0.5% of the total debt of PANYNJ.  Given the already large and stable revenue stream generated by the Port Authority overall, the incremental debt should have negligible impact on their credit ratings.