In December 2019, Bergen County’s Freeholders adopted a Parks Master Plan to “make County parks an integral part of each resident’s life, by providing easy access to the open spaces, preserving our natural areas and making outdoor recreation available to all.”1 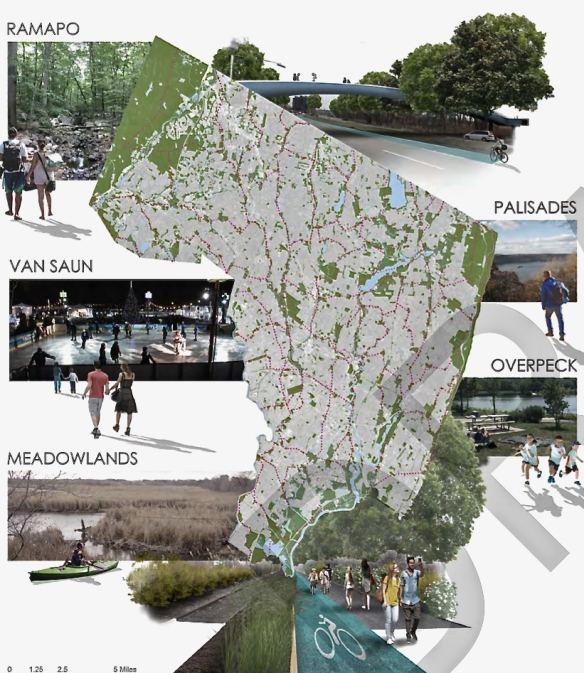 One aspect where the Parks Plan falls short is in its goal to provide “easy access,” particularly for those who don’t drive, or choose not to.  While early drafts called for a network of bikeways to link Bergen’s parks, that provision didn’t make the final version.

Accordingly, the County should commit to a Bicycle Master Plan – a bike network to address a range of recreational and commuting needs.

• The Northern Valley Greenway connecting Tenafly to Montvale would be a “spine” to any bike grid.2  Getting it operational should be an absolute priority.

• The Overpeck Park-to-GWB3 study offers ways to connect Leonia to NJ’s only bikeable Hudson River crossing.  Adding a bikeway to Degraw Avenue would extend access to Bogota Township and the municipalities along the Hackensack River north to Mahwah, including those detailed in the Central Bergen Bicycle and Pedestrian Plan.4

• Realizing cycling provisions of the River Road/Hudson River WaterFront Corridor5 would provide an alternative for tens of thousands who bus-commute to Manhattan.6

The County Plan should feature “numbered” routes extending the breadth of the County and connecting to routes in adjoining Counties.

It is modeled on the U.S. Bicycle Route System,7 and in NJDOT’s route linking High Point to Fort May.8  Routes would include aggregate existing on-and-off road routes, low-use residential streets and industrial areas that are quiet on weekends.

Routing past park rest stations at frequent intervals will greatly enhance the network’s utility. • Routes should be published online.  And paper maps should be distributed through bike shops and organizations.9 10

Such a network would facilitate day-trips by experienced cyclists and encourage newbies to venture beyond their neighborhoods and be a prerequisite to an effective bike-share system. 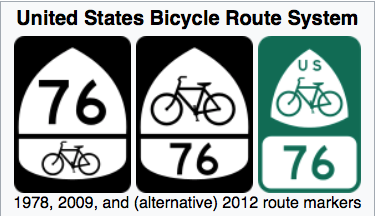 Negotiate with utility companies (PSE&G) to secure easements for dirt trails along its utility right-of-ways.11  When utilities are ultimately tasked to offset carbon emissions, they can book the increase in sustainable travel supported by these new bikeways.

Fund bikeways on bridges … including the GWB

The US DOT advises local transport agencies to treat biking and walking as equal to other modes and allocate up to 20% of the total cost to significantly upgrade capacity on major road and bridge construction projects.12 13 In this regard, Bergen legislators and Governor Murphy should prevail upon the Port Authority to upgrade paths across the George Washington Bridge.14 15 16 17

Resilience – Should the Hudson Rail Tunnels fail before replacements are constructed, a robust grid, bike-share and state-of-the-art-paths across the GWB could safely support 20,000 bike commuters per day.18 19 20

This happened after Superstorm Sandy, when bike trips across NY’s East River bridges surged from 13,000 to 30,000.21  This wasn’t happenstance.  It was preceded by decades of planning and investment, during which the public became accustomed to cycling.22

Investing in cycling extends the life of legacy infrastructure by slowing growth in demand, and the life of its replacement by offsetting induced demand

Sustainability – New Jersey has committed to an emissions-free energy policy by 2050.  With transportation representing 42% of total.  The 2019 Energy Master Plan calls for creation of charging infrastructure to facilitate the transition to electric vehicles.23

For far less cost, it could invest in a robust cycling grid that would encourage people to leave their cars behind entirely.  Studies show that achieving 14% bicycle/E-bike mode share world-wide could save $24 trillion between 2015 and 205024 and achieve a 10% reduction in transport emissions.25

Regional Tourism – Biking and walking contributes half a billion dollars a year to NJ’s economy.30  To the extent Bergen can lure some percentage of NYC’s 800,000 cyclists,31 it would have a huge impact on tourism.

With the opening of the Mario M. Cuomo Bridge, Bergen would be part of a forty mile loop during cyclists from across the region past local food stops.

Public Health – The Columbia School for Public Health found NYC’s investment in bikeways to be nine times more cost-effective as a public health intervention than vaccinating children against the flu.32

Portland, a city of two million, estimates its bike grid saves it $2.6 billion per year in reduced outlays for roads and mass transit and personal savings on car payments, insurance and gas.33 34

New York State committed $200 million to fund construction of the 750 mile Empire State Trail in 2017.36  That’s in addition to $400 million to create a shared use path across the Mario M. Cuomo Bridge.

London has been building up its bike grid since 2001, following the inception of congestion pricing, in order to reduce car trips into the Central Business District.  It now boasts a network of “bicycle superhighways” that connect its outer boroughs.  In 2018 it spent $270 million on its bike grid.  For 9.3 million residents, that’s $29 per capita.38 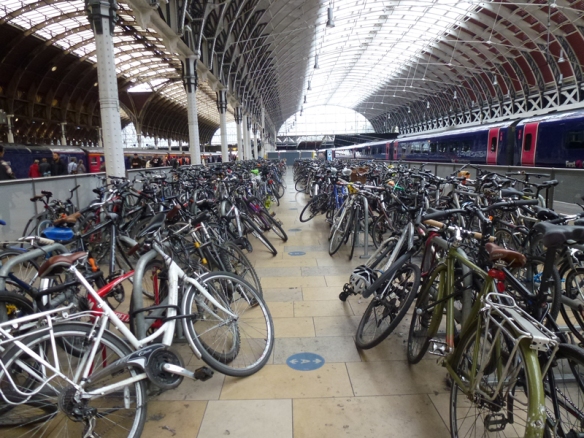 Fund cycling equal to other modes

Early aspects of a Bicycle Master Plan can take the form of a Complete Streets program to including biking-walking improvements into regular road maintenance.  For a NYC-London scale effort, it should commit to spending $20-30 per person per year.

Bergen is ideally positioned to benefit from bicycle infrastructure.  It has recreational space, low-traffic roads and population density.  Compared to other NJ counties investing in cycle infrastructure,46 47 Bergen’s proximity to the GWB and NYC will net it outsized returns from tourism and transport resilience.

The following are examples of “numbered routes” that were created using the mapping tool RidewithGPS.  Access requires setting up a free account.

The routes extend into adjacent counties.  This affords residents access to facilities outside the County and encourages cycle tourism within. 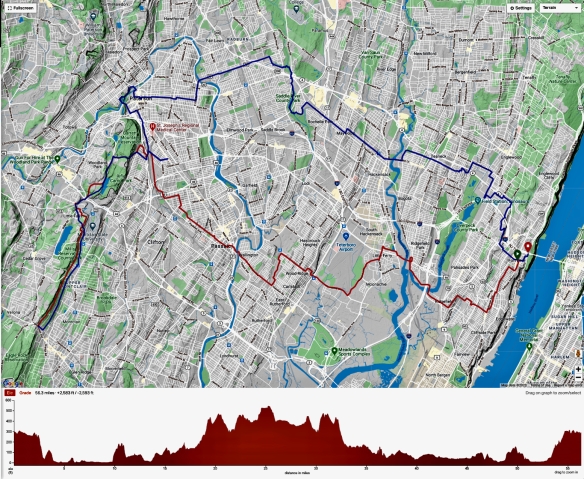 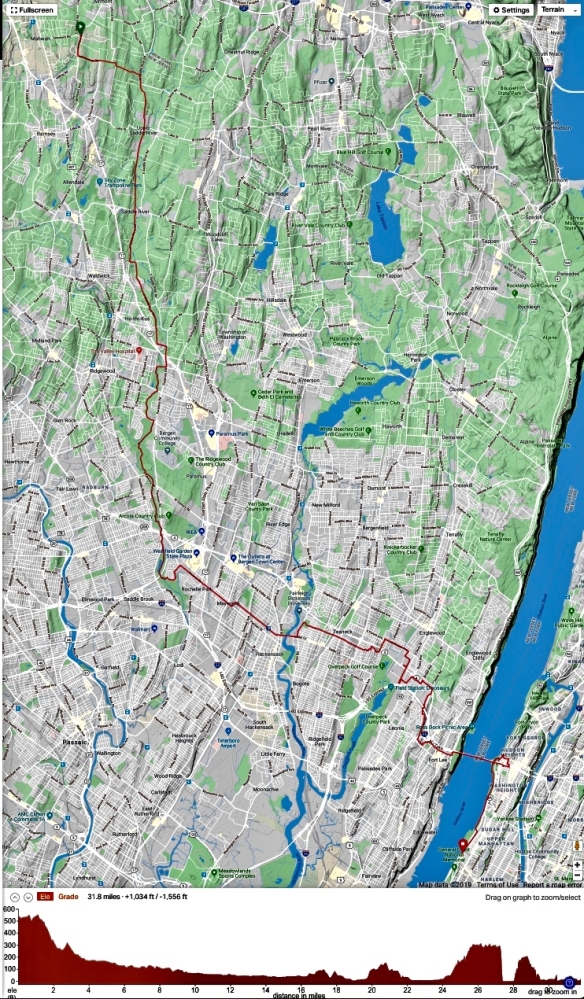 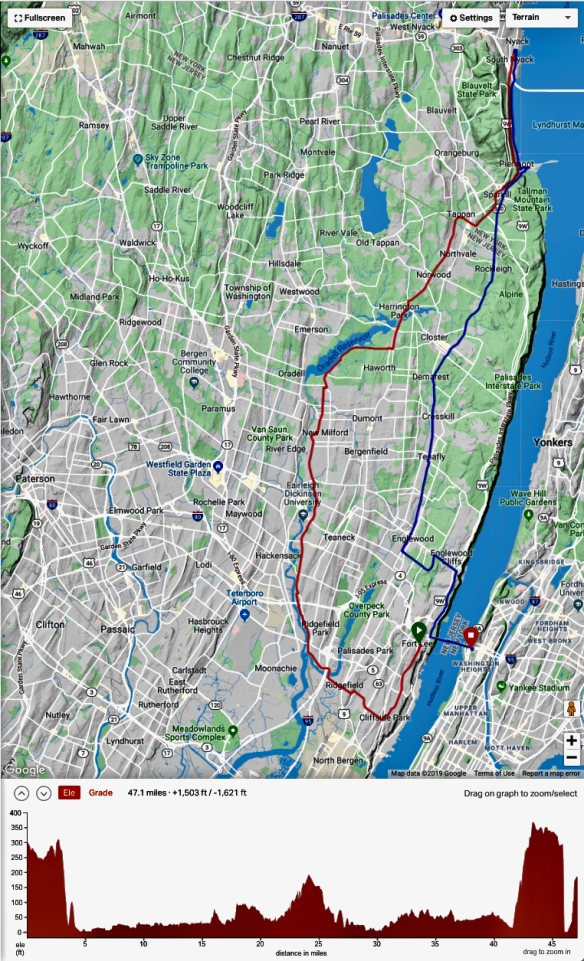 11 “Securing utility rights of way for use as bikeways”, railstotrails conservancy, https://tinyurl.com/vjhvz7r

24 “A Global High Shift Cycling Scenario: The Potential for Dramatically Increasing
Bicycle/E-bike Use in Cities Around the World, with Estimated Energy, CO2, and Cost Impacts,” Institute for Transportation & Development Policy, 11/12/15, https://tinyurl.com/rh9tda5

27 “20-somethings don’t want to be, and can’t afford to be, in a house in the suburbs. They’re flocking back to Philadelphia, Jersey City, New Brunswick.” “We’re Losing Less Land to Development in NJ, and Slowing Loss of Natural Areas,” NJ Spotlight, 2/3/20, https://tinyurl.com/twbyfqs

35 “Our efforts culminated in an expenditure plan that would spend over $4 billion on walking, biking, and connecting our residents to transit stations and bus stops over 40 years., Ballot Measure Recap: What Did We Win?”, Investing in Place, 7/20/16, https://tinyurl.com/jkyze4r

42 “Among the trusts that will benefit are the D&R Greenway Land Trust, for acquisition of a greenway through 24 municipalities in Burlington County, Lawmakers Ink Constitutionally Mandated Increase in Open-Space Funding”, NJ Spotlight, 1/14/20, https://tinyurl.com/v2ec7hr