As part of a $2 billon renovation, the Port Authority will soon open the North Path on the George Washington Bridge. Walkers, runners, sightseers and bicyclists will flock to see it. By the post-pandemic spring, their numbers will explode.

That’s when the path’s failure as public infrastructure will become clear.

In 2015, when NYCDOT performed a traffic study on the GWB south path, it found peak daily use at 3700 cyclists per day, which exceeded that of the Queensboro and Brooklyn Bridges, yet its 7-foot wide path is far narrower than either.

The consequences of allowing high numbers of cyclists and pedestrians to interact on a path well deficient of national standards are predictable.  As the Port Authority concedes in its 2017 Bicycle Master Plan (p. 42); “39 cyclist-related accidents were reported on or in the vicinity of the GWB between 2010 and 2016.  They represent the majority of reported bicycle crashes on Port Authority properties and facilities, which is predictable, give the volume.”

Public embrace of biking and walking has shot up over the past decade. Many transit agencies have acknowledged this trend with far-sighted designs that accommodate safe use, induce demand and insulate the operators from liability.

The Port Authority, for instance, gave its raised Bayonne Bridge a 12-foot bikeway (2019),1 and its replaced Goethals a 10-foot path (2020).2  Both projects now facilitate one hour bike commutes into Lower Manhattan.3

Cyclists and pedestrians can now cross the magnificent Mario M. Cuomo Bridge on a 12-foot shared-use path (2020),4 thanks to the New York State Thruway Authority. And they can spread out on a 20-foot-wide facility on the Kosciuszko Bridge (I-278) between Brooklyn and Queens, courtesy New York State DOT (2020).5

This spring, the New York State legislature passed bills calling on the Metropolitan Transportation Authority to extend bike access across its seven bridges.6 7 8

In September, New York City DOT repurposed a car lane across the Brooklyn Bridge to alleviate perennial conflicts between cyclists and tourists.9 And it committed to double bike-ped capacity across the Ed Koch/QueensBoro by the end of 2022.10 11

So it is in this context that the Port Authority has rebranded the path across the George as the “North Walk.” 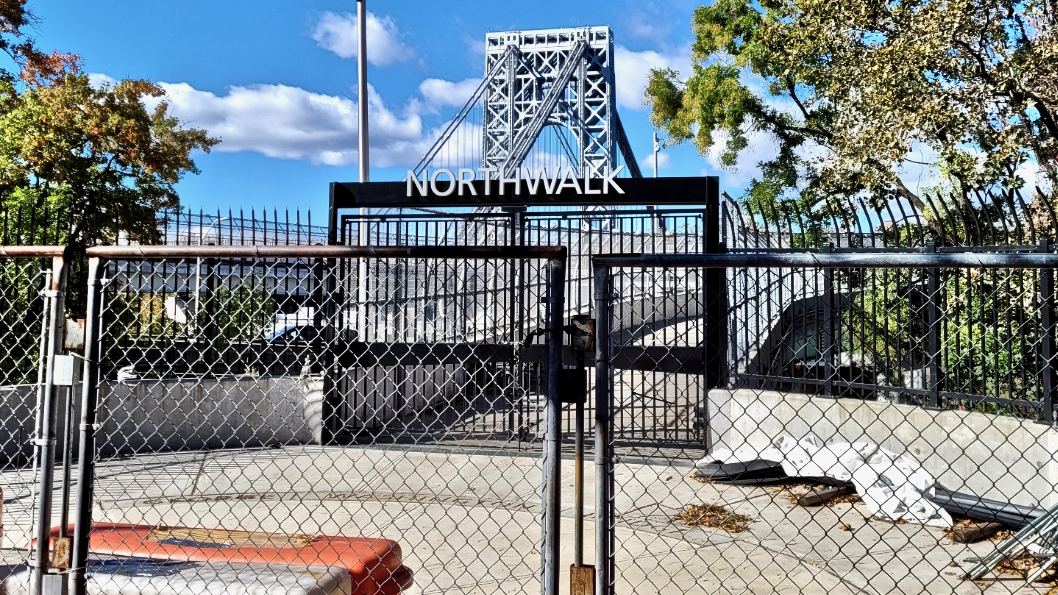 This is not unexpected, given the liability the Agency would incur for permitting thousands of cyclists and pedestrians to interact on a substandard facility.12 13 Nonetheless, the decision will have a long term impact on the region.

First, presume New York will move forward with some form of congestion pricing. If so, we can expect that New York City will move to restrict non-resident parking in upper Manhattan.14 In this scenario, a widened GWB could support a park-bike-ride option for tens of thousands of North Jersey commuters.

But because they stress the level of service on even modern facilities, their sustained adoption will depend on infrastructure that enables safe operation. Which is why the PA’s choice not to support their use across the George is such a lost opportunity.19

6 “Legislators Hope to Get Cyclists And Pedestrians A Voice At The MTA,” StreetsBlog, 6/9/21, https://tinyurl.com/2dxw65ca

11 Even these enhancements have been criticized by cycling advocates as inadequate and delayed given that cycling across NYC surged by a third since the onset of the pandemic—and nearly two-thirds on weekends. “Cycling in the City, Cycling Trends in NYC,” NYC Department of Transportation, 9/21, https://tinyurl.com/3szerjku

12 “Safety, Litigation and the Demise of Cycling on the GWB,” Complete George, 9/17, https://tinyurl.com/5mxz7sjy

13 In 2015, peak bike use across the GWB exceeded the Brooklyn and QueensBoro Bridges—which were twice as wide then and are now getting upgrades. “Capacity and Demand”, Complete George, 9/16, https://tinyurl.com/33aaxf26

14 “Residential-Parking Permits: An Idea Whose Time Has Come?” StreetsBlog, 8/20/19, https://tinyurl.com/ybfsprfv

17 “Even if all new cars were fully electric, it would still take 15-20 years to replace the world’s fossil fuel car fleet. Emissions from cycling and e-biking can be 10 times lower than driving an electric car.” “Obsessing over electric cars is impeding the race to net zero: More active travel is essential,” Oxford University, 6/14/21, https://tinyurl.com/ywkpjff

19 “As I negotiated the chicane around the pylon, a motor scooter identical in size and look to a Revel approached.  I stopped to see if the officers would respond, and they did.  Pulling him over. I didn’t wait to see if they gave him a citation but it very much looked like that was exactly why they were there.” R. Schmon commenting on the GWB south path, New York Cycle Club message board, 11/9/21, https://tinyurl.com/2eekvc2s (membership required to view)