New York has also signed onto the Transportation & Climate Initiative of the Northeast and Mid-Atlantic States—a regional compact to tax gas consumption and use the proceeds to fund sustainable technology and user incentives.2

The state can have its biggest impact by addressing emissions from transport, as these contribute more than a third of its greenhouse gases. 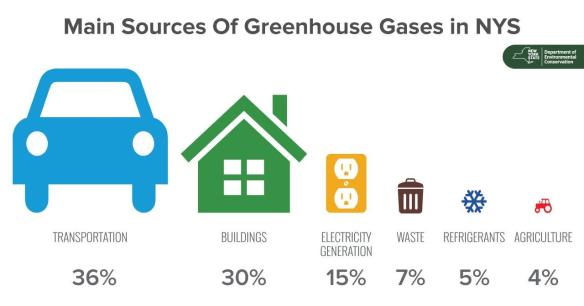 Commitment to a cycling network

New York is investing billions of dollars in bike infrastructure.

New York State has allocated $500 million to put bikeways across the Mario M. Cuomo and Kosciuszko bridges and to build out the Empire State Trail.8

New York City has grown its bike grid to 1250 miles; its bike share program to 17 million trips per year; and its constituency of cyclists to 800,000.9  Over the coming 10 years, it will spend $1.7 billion on Vision Zero improvements.10

A crucial link in the chain

The GWB is the linchpin of the region’s bike grid.  It directly connects the nation’s two most heavily biked routes: Hudson Greenway and Route 9W.11

The Port Authority’s plan to rebuild the North Path as a 7-foot sidewalk is like connecting two fire hoses with a straw—wholly inadequate to support the current volume of traffic, let alone the growth to come.12 13 14 15

Restoring the North Path to a pedestrian standard will “collar the baby,” ensuring that the popularity of cycling chokes on its own growth. (The PA’s plan meets the ADA standards for pedestrian travel—which is half what AASHTO recommends for cycling.)16

If New York fails to prioritize cycling as the cost-effective means to reduce transport emissions, it will have to fund more expensive strategies to achieve its climate goals.

The farsighted and fiscally sound choice is to build out the GWB North Path to the standards of modern bikeway to strongly encourage the growth of cycling locally and across the region.

This will grow bike use for recreation; mitigate the impact of congestion pricing on Upper Manhattan;17 and offset the economic and ecological fallout from widespread mass transit outage—notably failure of the Hudson rail tunnels.18 19

3 “A (global) increase in cycling could save $24 trillion cumulatively between 2015 and 2050 and cut CO2 emissions from urban passenger transport by nearly 11%.” “A Global High Shift Cycling Scenario,” Institute for Transportation and Development Policy, 2015, https://tinyurl.com/y9qpz7xb

6 “For the equivalent cost of a single mile of freeway ($60 million), Portland has a bike infrastructure” Politifact, 2/22/11, https://tinyurl.com/y4ses5yx

15 “We predict a doubling of bike trips from 2019 to 2022.  The difference will be marked. Tens of billions of additional bicycle rides per year means fewer car trips and lower emissions, with spillover benefits for traffic congestion and urban air quality.” “Cycling’s technological transformation, Making bicycling faster, easier, and safer,” Deloitte Insights, 2020, https://tinyurl.com/yxcaxzjl

18 “(Failure of the Hudson rail tunnels would result in) two million additional tons of carbon dioxide (CO2) in the atmosphere, the equivalent of 2.6 million people flying between New York and San Francisco,” “A Preventable Crisis: The Economic and Human Costs of a Hudson River Rail Tunnel Shutdown.”, Regional Plan Association, 2/25/19, Section 6, https://tinyurl.com/y3d87rad

19 “GWB paths widened to comply with AASHTO would safely support 20,000 cyclists per day,” “With tunnel repairs in the offing, bikes are key to keeping people on the move,” NJ Spotlight, 7/23/18, https://tinyurl.com/yb5r9g57